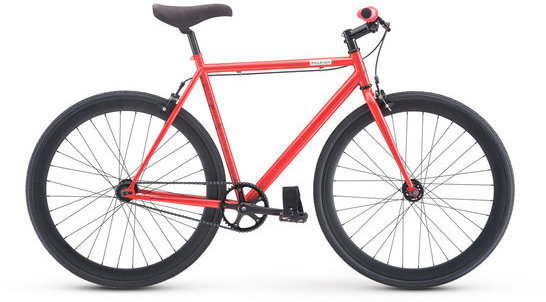 This item is currently not available.

Designed for mastering the backstreets of the urban jungle, the Back Alley is a fixed gear single speed steel bike made with equal parts artistry and attitude. It features riser handlebars that put the rider in a more upright riding position to spot and dodge obstacles ahead, BMX-style grips, a steel frame and fork, fixed/free capabilities (to run as a single speed or fixed gear), as well as removable brake hardware/cable guides for a clean look.

The Back Alley was inspired by Nelson Vails—the first African-American cyclist to win an Olympic Medal in cycling. Created by Raleigh in collaboration with Nelson and his best friend, famous graffiti artist, Zephyr, the Back Alley’s story actually takes place before Nelson’s Olympic days when he rode fixed gear bikes as a messenger in NYC. The frame features meaningful original illustrations by Zephyr including Nelson’s signature Converse Chuck Taylor Hi Tops, an iconic dime (what Nelson used to call his messenger service for the location of his next job), the flag of the Checkered Cab (onto which Nelson grabbed bumpers to catch rides), the notorious TOGA bike shop (where messengers hung out), and Cat’s Paw Hill in Central Park (where the crew met to ride and skate), among others.